Blog
You are here: Home / Blog / Academics / From Ball State Students to Faculty 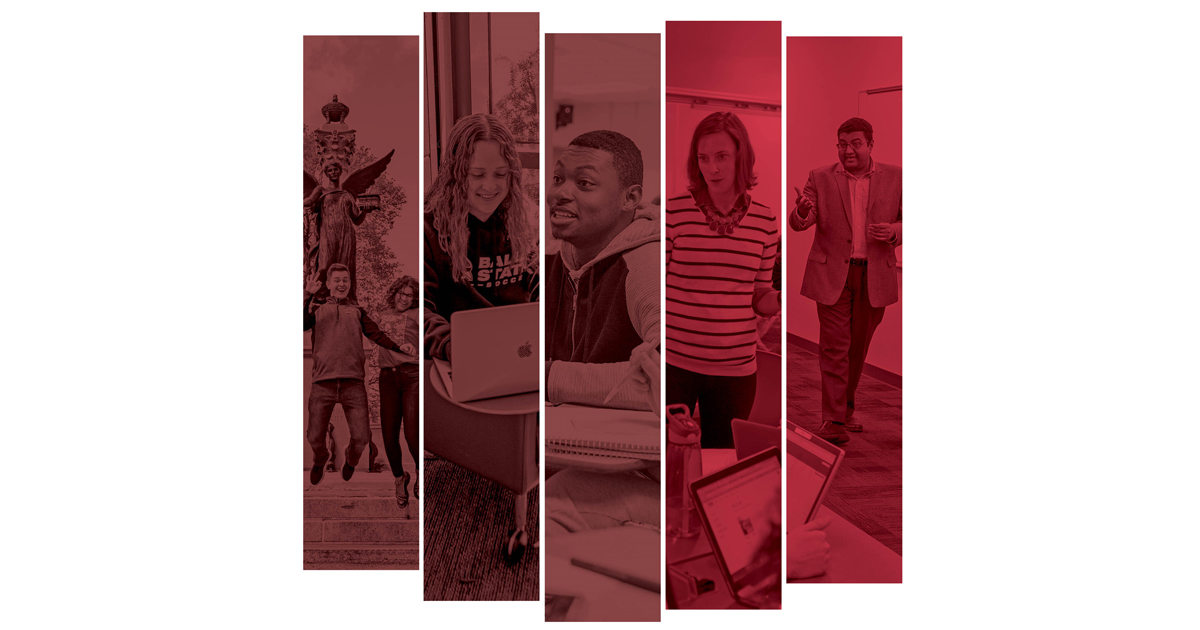 Ball State graduates are empowered to lead meaningful lives after their time at the University. For some, the most meaningful path returns them to Muncie and back to the classroom, where they lead and inspire the next generation of students. These individuals embody the Beneficence Pledge and add depth to the Ball State community, but they each also bring a new personality, new story, and meaningful perspective to the University. Here are just a few of the many who have journeyed from students to faculty at Ball State. 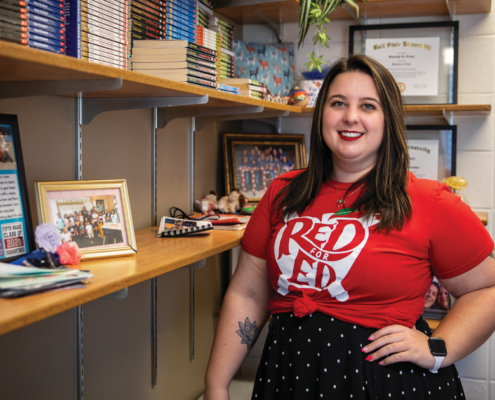 As a student, Ms. Frantz didn’t come to Ball State to pursue teaching, but an experience volunteering at Hazelwood Christian Preschool near campus changed her path.

“I remember we were building something with blocks, and one of the preschoolers that I had been working with made a connection with the blocks. I thought, ‘Oh my gosh, this is it. I helped him do that. This is what I’m supposed to do.’” Ms. Frantz said. “I changed my major that day and have been in Elementary Education ever since.”

After graduating from Ball State’s Teacher College and teaching for two years in Indiana, Ms. Frantz took a job in Tucson, Arizona. There, she grew as an educator—the results of which are displayed across her office in the numerous children’s drawings of cacti, lizards, and llamas. Reflecting on these gifts from students and parents helps Ms. Frantz remember the importance of her work.

“I still get texts from parents, just checking in on me,” she said. “I’ve saved a couple of really sweet ones because you don’t realize the impact you’re having.”

After five years of teaching in Tucson, Ms. Franz returned to Indiana to be with her family. When a position became available at Teachers College, she knew it was time to increase the scope of her positive impact in education.

The ripples of her influence will continue, growing wider by the years, as Ms. Frantz further establishes herself at Ball State. 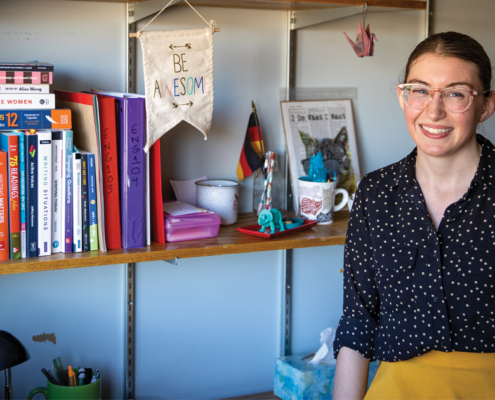 Starting her freshman year, Emilie Schiess folded one paper crane a day. After 1,000 days, in her junior year, she had completed a multi-colored paper crane work of art.

The paper crane sculpture has hung in her dorm room during undergrad, her apartment during her graduate program, and now hangs in her faculty office in the Robert Bell Building. The cranes are a colorful embodiment of Ms. Schiess’ migration from Ball State English student to faculty member.

Ms. Schiess has spent a significant amount of her nearly 10 years in the Robert Bell Building in the Writing Center. Throughout her eight years as a tutor, she held 616 sessions—the third largest number of sessions by a single tutor in the history of the Writing Center. Those tutoring experiences allowed her to collaborate with peers, be mentored by faculty, and grow as a teacher.

“When you’re one-on-one with a student, you truly get to see what they care about and what’s happening with their writing,” Ms. Schiess said. “When I was an instructor during graduate school, I discovered that what students couldn’t say in the classroom they told me when I was their tutor.”

Ms. Schiess incorporates her tutoring experience and her research on writing anxiety into her teaching, with impactful results. In 2020, she was honored with the Ball State Excellence in Teaching Master’s Level award, and in 2021 she won the Ball State Outstanding Graduate Student Teaching award.

But even with the accolades, Ms. Schiess doesn’t settle for doing the same thing over and over again.

“After I teach, I go home and think about what could I have done better? Or what do my students need?” Ms. Schiess asked. “So, I try and look at everything around me as potential teaching material, and I try to impart that thinking to my students: you’re always surrounded by things to learn about and people to learn from.” 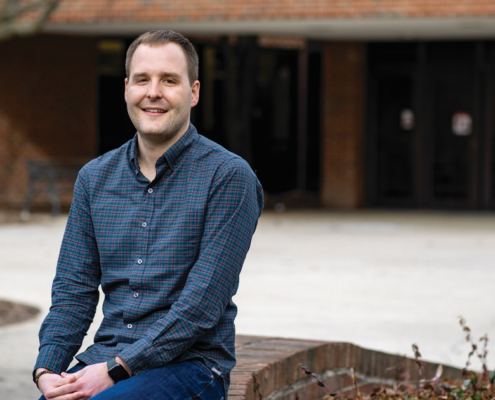 In his senior year as a student, Mr. Hostetter lived with three roommates in a 700-square-foot apartment. With low lighting, empty pizza boxes, and a lot of gumption, Mr. Hostetter and his roommate Chris Wilkey, ’13 MBA ’16 MA ’18, started Hosskey Consulting, a digital marketing freelance company.

At the time, digital marketing was relatively new. Young, ambitious, and willing to take a risk, Mr. Hostetter and Mr. Wilkey seized the moment to capitalize on a new form of marketing. Their venture quickly attracted the attention and support of their professors, many of whom Mr. Hostetter still runs into in the hallways of the Whitinger Building.

Their consulting venture started rocky but eventually gained traction. As time went on, their profitable business caught attention and merged with a larger agency. After working there for several years, Mr. Hostetter returned to Ball State to pursue a master’s degree in Emerging Media Design and Development.

Back on campus, he reconnected with his former business partner—now assistant lecturer in the Miller College of Business—Chris Wilkey. Upon graduating from the master’s program, Mr. Hostetter knew the next move was to follow in Mr. Wilkey’s footsteps and venture into teaching.

Now back on campus as faculty, years after he took a risky leap of Hosskey Consulting, and only a few blocks away from the apartment where it all started, Professor Hostetter is teaching the next generation of entrepreneurs in digital marketing. 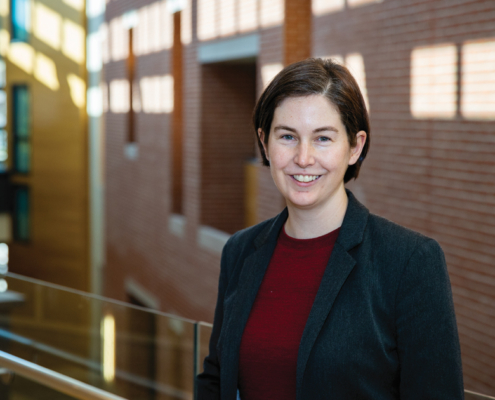 Dr. Betsy Pike returned to teach at Ball State because of the people.

“I’ve worked, taught, and been a student at three different universities, and the Ball State Department of Media is one of the best I’ve ever worked in,” Dr. Pike said. “Everybody gets along. Everybody has a voice. It feels great coming back. It’s like I never left.”

“What’s so neat about the degree is you learn academic theory and hands-on production techniques.” she said. “It’s not an MFA program where you are only doing the production and art side, nor is it solely academic. It’s a blend of each with a focus on visual storytelling. So, I had the opportunity to produce many creative works in the program.”

Now teaching at Ball State, Dr. Pike is developing a freshman production course that enables students to create media in their first year, concurrently with their theory courses. In a shift away from a theory-focused first year, students will be exposed to creative projects and media theory simultaneously as freshmen, allowing them to discover their interests and talents early on in their time at Ball State. 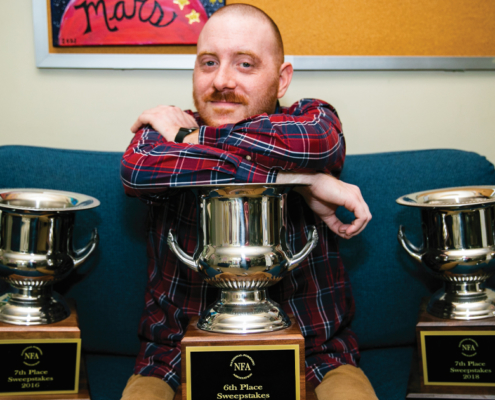 Assistant Lecturer of Communication Studies; Director of the Speech Team

With an overabundance of popular media available to consume, declaring what is best, or even what is good, can be fraught with criticism.

Despite what students might jokingly suggest in the evaluations of his popular culture class, Mr. Coile has no qualms about his Taylor Swift references and his love for cats. Though he is careful to note that he is “cat-monogamous” and only has room in his life for his one cat, Laura Dern.

The speech team functions like any other sports team—coaches, rosters, constant practice. It is a competition that requires hours of preparation and commitment. But there are elements of creativity involved, for speech is also an art in which, as Mr. Coile put it, “people discover their voice.”

That was his experience when he was introduced to speech competition in sixth grade and discovered that it was a combination of theater, performance, and competition. Mr. Coile competed for the next 10 years. Looking back, he recognizes that discovering the speech team “shaped everything I did after that.”

Ball State has won the Indiana state speech championship for 10 consecutive years and placed at the national tournament for the past six years. This reputation, along with the opportunity to be one of the team’s graduate assistant coaches, brought Mr. Coile to Ball State as a student for his master’s degree in Communications.

The opportunity to be the director of Ball State’s speech team brought him back in 2021. In his first year as director, the team has maintained its winning reputation while keeping the team’s alumni involved.

“I don’t want to lose any of the connective tissue of the past,” Mr. Coile explained. “There’s all these traditions and folklore of the team. For example, we decorate the team room every year for state competition. So, when we get ready at six in the morning for the competition, the team is surrounded by pictures of alumni and encouraging notes from them on the walls.”

Mr. Coile realizes that they may not know who many of the graduates are, but one day it will be their faces on the wall, cheering on the speech teams of the future. 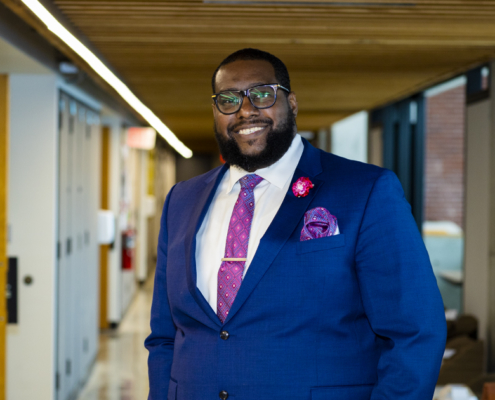 Like the look of the new Multicultural Center on campus? Thank instructor Emile Dixon.

His initial designs date back to when he was an undergrad student in 2009. At the time, he recognized that Ball State’s campus climate wasn’t what it could be, and crafted designs for a new center that would better serve Ball State’s diverse student population.

Returning in 2017 as a faculty member in the R. Wayne Estopinal College of Architecture and Planning and a full-time practicing architect, he finally had the chance to turn those dreams into reality.

As part of the design team for Ball State’s new Multicultural Center, he split his time on campus between teaching class and overseeing the project’s development. His on-the-ground experience as a practicing architect is a great advantage to his students.

“I’m always bringing what’s in the real world back to the classroom to prepare my students for what they will face,” he says.

This emphasis on real-world experience is part of Mr. Dixon’s background. Before starting as a student at Ball State, he was constructing houses with his father and uncle. One of their contracts was the colorful Millennium Place affordable housing on Madison Street in Muncie. Primarily due to his background, Mr. Dixon remains grounded in the effect of architecture on local communities.

From the high tower of the Architecture Building, he instills these values in his students: “I give my students the real-world perspective. That mindset makes a lot of difference in the design and teaching process. Whatever they don’t know, I don’t leave them to figure it out. My job is to teach it to them right then and there.”