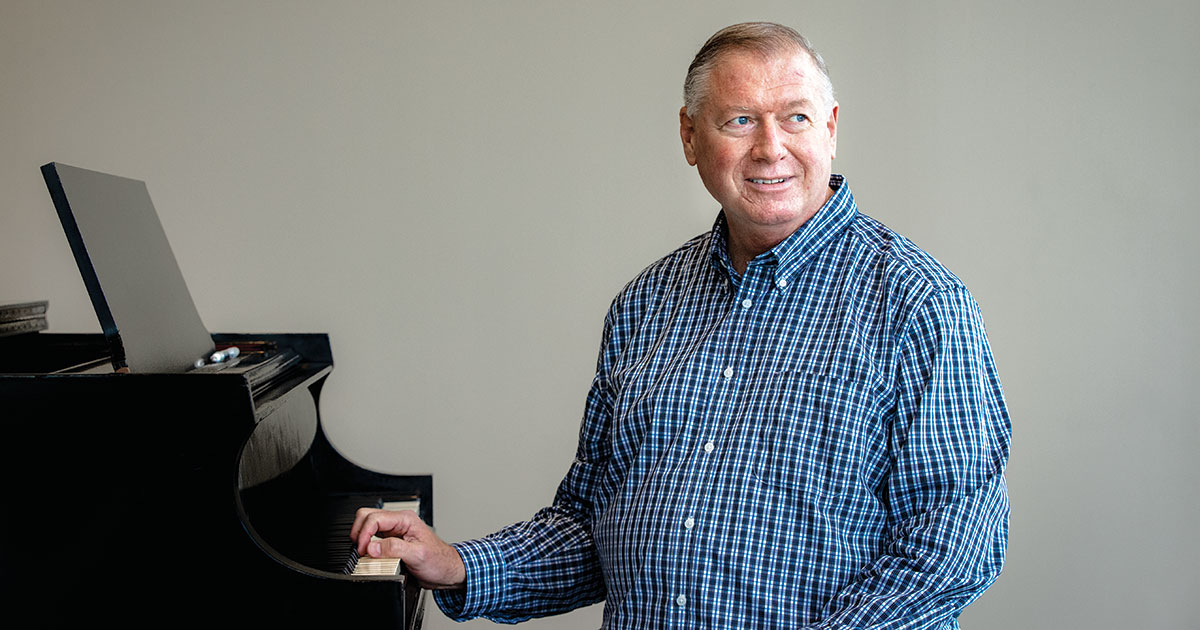 It was March 2020. Rafter had flown to New York to music-direct Ball State Theatre and Dance students in a showcase for industry professionals and to collaborate on the Senior Musical Theatre Capstone Cabaret with Tony Award winner Sutton Foster, who also teaches at Ball State.

He then performed a concert with Foster—who has worked with Rafter on many projects over the years—before departing for the University of Hawai‘i at Manoa to coach voice students. He flew back to Muncie on a Sunday, and Ball State suspended in-person classes that Monday.

As Rafter transitioned to online instruction, he watched helplessly as the COVID-19 pandemic crippled the entertainment industry—from Broadway to community theater.

“People crave live performances. It’s a gift and an unforgettable experience with a group of strangers. We will get back there, eventually, and I’ll be one of the first in line.”

“Wild. It was wild,” said Rafter, who won an Emmy Award for his work on the television adaption of Gypsy and lent his musical talents to nine Broadway shows—most recently as musical director for the critically acclaimed Violet, with Foster in the title role.

“You can teach our craft virtually—it’s not ideal, but we made it work last Spring,” he said in an April interview. However, when Ball State moved to a combination of online and in-person learning in the Fall, Rafter said he found the mix somewhat jarring. 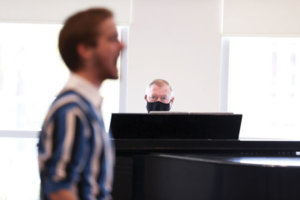 Rafter teaches a beginning musical theatre student in his “Introduction to the Singing Actor” course.

“But this semester, I have more students in person, and it’s wonderful,” he said. “We can really dig in, as a class, to the work and support each other as artists.”

When students shared their experiences about COVID-19’s impact on their training and future, Rafter repeated to them what he’s told his daughter, who graduated from college as a theater major last year.

“We are going to get over this pandemic, but the when of it is going to take a while. But you are an artist, and you have spent your educational career learning how to be malleable and innovative. If you try something and it doesn’t work, you pivot and figure out another way.

“That’s what we’ve got to do—as individuals and as an industry.”

For Ball State performers, that meant adjustments such as moving outdoors or livestreaming virtual events, sometimes with unmasked actors performing in different rooms.

Although the country moved closer to normal after COVID-19 vaccination distribution this Spring, Rafter said it will take years for many theater spaces to bounce back to pre-COVID-19 operations, if they bounce back at all.

“For Broadway to get back up and running, people need to feel safe to pack into theaters. Broadway can’t afford to run shows and open theaters with people seated six feet apart. And people have to have the disposable income to travel and pay babysitters and buy tickets.

“It’s going to take a village, with everyone giving a bit. Landlords are going to have to give a bit on what they are asking for rent, and producers might not need to take as much as they are taking, and theaters might need to reduce ticket prices.

“Once you have something as dramatic as this, you can’t go back to the way things were. The industry will never be as it was. Is that all bad? No. We’ve found some of these virtual modalities are useful. We’ve learned to make and share recordings, we no longer feel the need to fly people in for this or that.”

Despite these adaptations, nothing will replace live theater, Rafter said. Audiences will always prefer being in the same space as the actors and musicians—seeing them, feeling their energy. There’s nothing like it, he said.

He was reminded of that this Spring as he walked into New York City’s famed City Center to participate in the live filming of Sutton Foster | Bring Me to Light. The concert premiered in April, with on-demand viewing available through May. The concert featured Foster’s friends and fellow Broadway actors, as well as Ball State musical theatre major Wren Rivera, ’21, who is a student of Foster’s.

“It was magical,” Rafter said of being together on stage.

“People crave live performances,” said Rafter. “It’s a gift and an unforgettable experience with a group of strangers. We will get back there, eventually, and I’ll be one of the first in line.” 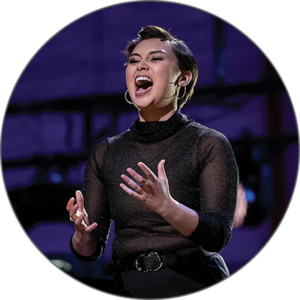 “My senior year of high school, I played the iconic Sutton Foster role of Reno Sweeney in Anything Goes. Four years later, it’s my senior year at Ball State and Sutton Foster and Michael Rafter have invited me to perform at the New York City Center for Sutton’s Bring Me to Light concert,” music theatre major Wren Rivera wrote on Instagram.

Rivera is an actor, singer, and dancer who appeared most recently on the Ball State stage in She Kills Monsters as Tilly and in Twelfth Night as Viola/Cesario.

“Thank you to my family at Ball State for making this happen.”

At Ball State, Aric Fulton Challenged Himself and Others to Excel