Blog
You are here: Home / Blog / People / Students / At Ball State, Aric Fulton Challenged Himself and Others to Excel 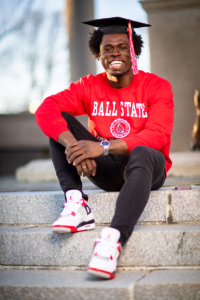 Aric Fulton, ’21, has traveled far since his first year at Ball State.

He recalls jumping up and down with excitement when he learned he’d been accepted to the University, but after arriving on campus as a first-generation student, he felt discouraged.

Before his sophomore year, he committed to a new direction, telling himself: “‘Yo, you’re in charge of this experience, so you have to put yourself out there. You have to make choices that are going to get you the experience that you want.’”

This Spring, Fulton was selected for the one-year Newman Civic Fellowship. He was chosen among a select group of students from across the country who were considered for leadership skills and a commitment to finding solutions to significant challenges facing their communities.

In nominating Fulton, President Geoffrey S. Mearns described him as “a student leader deeply committed to our University’s ambitious goal of Inclusive Excellence.”

Volunteering in Muncie for two youth organizations, he established a college scholarship for students at his Hammond, Indiana, high school and donated the first $500 from wages he earned working a Summer internship. 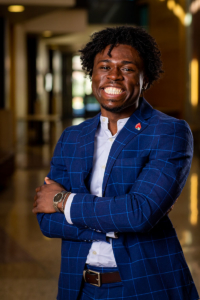 Fulton, a Journalism Education major and African American Studies minor, will pursue a master’s degree in Urban Education Policy this Fall at Brown University on a full academic scholarship.

He admits it was hard at first to convince himself he could truly make a difference in others’ lives. “But, my experience working with strong-minded, kind-hearted, resilient, and community-oriented people across campus has proved otherwise,” he says.

“Growing up, I didn’t personally know anyone who had a college degree,” Fulton said. “I feel there is a need for Black people in education—teachers, administrators, policymakers—and I feel it is my responsibility to fill that need, so people who come after me have a better experience.”

At the same time, Fulton said, “None of my success would have been possible without many exceptional people in my corner.” Those include his grandmother and mother, his four siblings, other relatives and friends, “and my mentors Dr. Emily Rutter and Mr. John Anderson—all of whom I am entirely grateful for helping me make this leap in my development, to name a few.”

Tina Brown’s Job at Ball State Is a Family Tradition

From Ball State to Broadway, Michael Rafter Forecasts What’s Ahead for Live... Scroll to top