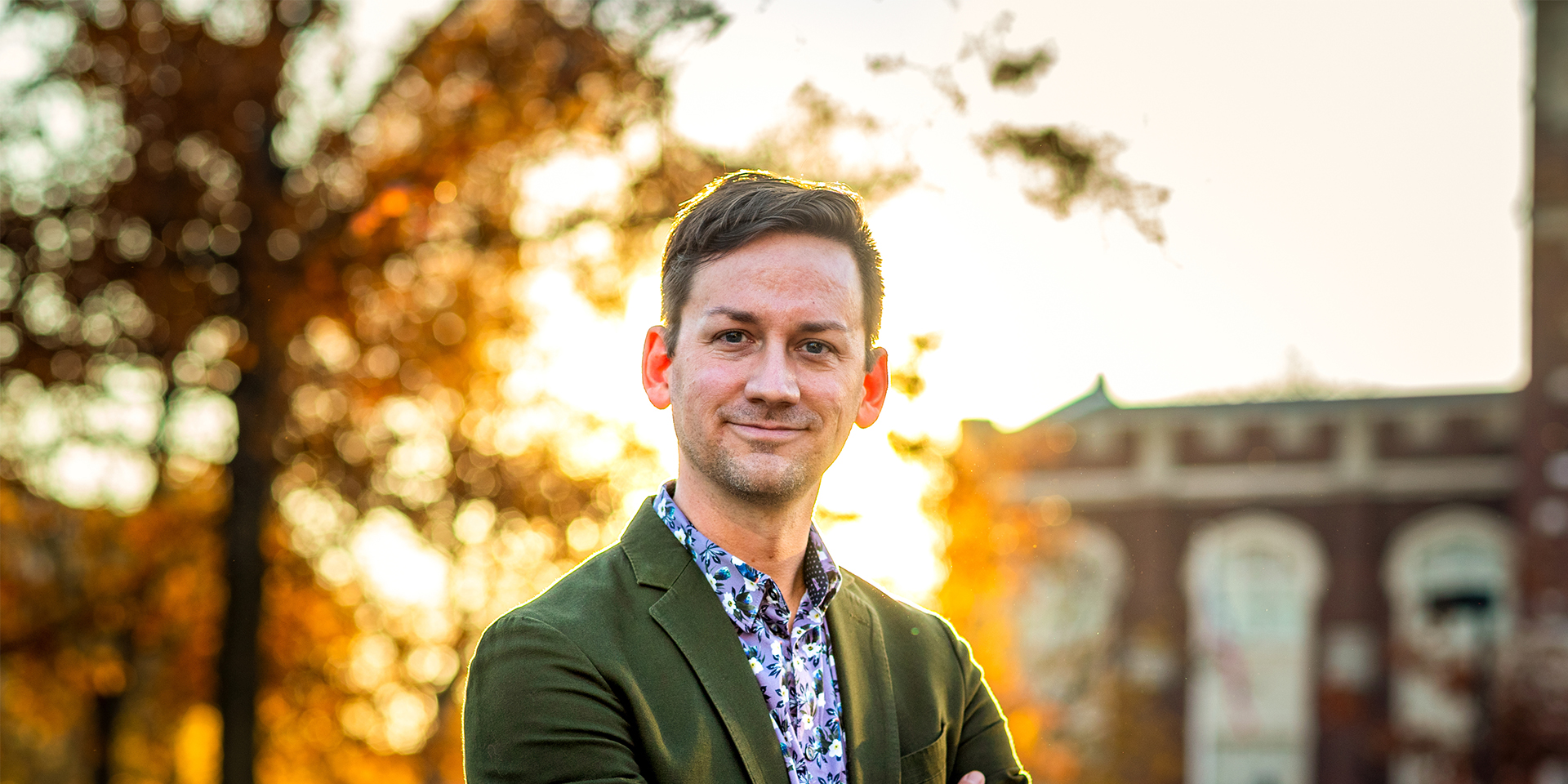 In terms of embracing his identity as a gay man, Jonathan Scott, ’05, has come a long way since his undergraduate years at Ball State, when he was still mostly “in the closet.”

It’s been a 180-degree turn in the years since. He is now proudly gay—in his workplace, as a digital strategy manager for Eli Lilly and Company’s corporate affairs and communications team, in his community, and as a Ball State alumnus.

At Ball State, Scott was a journalism major, Alpha Tau Omega fraternity member, and active in Campus Crusade for Christ. Now a member of the Ball State Alumni Council, he participated this Fall in an Inclusive Excellence Roundtable hosted by President Geoffrey S. Mearns. Also in 2020, he was chosen as Business Leader of the Year by the Indy Rainbow Chamber of Commerce for his work as chair of the Lilly Pride employee resource group, which has thousands of LGBTQ+Allies members.

This past June, LGBTQ Pride Month celebrations marked the 50th anniversary of the Stonewall Riots in New York City that catalyzed what became the modern gay (later LGBTQ) rights movement. That fact was on Scott’s mind when he wrote the following essay, originally published in CCIM Digest. “In true David Letterman fashion,” he says, the top 10 list provides ways to become “a better ally, for those who ID as straight, and cisgender. These are simple and practical, good in Pride Month and good always.”

1. Film Will Feed Information to You

You hardly have to work for it! Watch movies about LGBTQ identities, cultures, and relationships. For starters, I recommend the Oscar-nominated Portrait of a Lady on Fire,Weekend and, of course, the heralded Oscar winner Moonlight. Now that’s infotainment.

2. Chase Those Films with Documentaries

My suggestions are Paris Is Burning about the 1980s queer-trans-drag underground (and vernacular) in New York, and The Death and Life of Marsha P. Johnson, a tragically beautiful tale about a statuesque figure in Stonewall-and-beyond lore, readily available to most via Netflix.

I recommend anything from gay black author James Baldwin’s oeuvre, including Another Country, and Giovanni’s Room. I’m also partial to tweets from Meredith Talusan, who has a new book, Fairest, in which she speaks to being a trans woman from the Philippines who has albinism.

4. Study up on LGBTQ Terminology

Pronouns (mine are he/his) and inclusive ways in which you can talk to LGBTQ neighbors, classmates, colleagues, and loved ones. Here’s a helpful primer, via Human Rights Campaign.

You can start with Ashley Ford, ’13, on Twitter. Ball State’s 2018 Winter commencement speaker, Ford’s got a vivacious voice on that platform, and the writer-presenter bona fides to back it up. View video.

6. Discern Ways You Can Give — Your Time, Talent and Treasure — in Your Own Community

For me in Indianapolis, that’s spread across organizations such as The Damien Center, Indiana Youth Group, BU Wellness and GenderNexus, among many other mighty fine orgs doing amazing work to make life better for LGBTQ youth and people of all ages.

And respond accordingly. Before COVID-19 overtook most of the world, and before the racial unrest consumed U.S. conversation, 150 to 400 years later than it should have, these kids already had it unspeakably tough. They’re vulnerable in these times of societal discourse and charged, even flagrant, public expression of all kinds. They need our help. Learn about the need and how you can support The Trevor Project and other organizations. View video.

Be content to do some self-study on all the above, and then sit with the questions and thoughts you have about the topics. And then: ask. Don’t be afraid to say the so-called “wrong” thing. Everyone in the LGBTQ community has walked back something they’ve said or asked even within their own community. It’s diverse, and it has diversity of thought. We embrace that. You can do so, too — and you’ll find yourself embraced as well.

9. Seek to Help Others

If you hear someone asking a legitimately abrasive or disrespectful question of a LGBTQ person, take them aside after that meeting or have a hallway (or online) conversation about how that phrasing or tone might be received by the LGBTQ peer. Doing so graciously and in private, at least on the first attempt, can be affirming to the person to shift their future ways of thinking and operating.

There’s a reason we celebrate Pride Month in June, as shared above, and it may be a “miles underfoot, with many miles to go” mentality on our planet still, but it is right and good and healthy for us to let loose and enjoy the fabulous fashions, cultures, and expressions in the LGBTQ community — local, national, and global. Because a pandemic and a glaring equality issue, in 2020, have revealed just how disconnected and yet connected we truly are. All things glocal.

Behind the Scenes, Ball State Alumni Make the Indy 500 Happen
Scroll to top