[dropcap]S[/dropcap]imon Balto joined Ball State’s history department in 2015 with a mission in mind: to bring back the university’s African American Studies minor.

“We’re a growing institution with an increasing number of minority students,” Balto said of Ball State, “and because we live in an increasingly diverse world, employers want students who can think in a broader cultural context. That’s why a program like this becomes so important.”

Abel Alves, chair of the history department, welcomed Balto’s efforts to resurrect the minor. It was last offered in 2010, when the previous professor who oversaw the program retired.

In its newest iteration, the minor includes courses in architecture and planning, communications, criminal justice, English, history, political science, psychological science and sociology. With its return, Ball State is one of six Indiana public universities to offer a minor in African-American Studies or related areas.

The minor is open to all students. Alves encourages undergraduates across disciplines—from telecommunications and journalism to urban planning and entrepreneurship—to consider adding it to their academic plan.

“It would prove relevant to reporting contemporary events or revitalizing an African-American neighborhood. It provides the information and context needed to make intelligent choices.”

Balto hopes future social studies teachers also consider the program. “Because Ball State has such a strong background in teaching teachers, these are the people I’d recommend the minor to most.”

With the minor available as of this fall, Balto is helping more students officially register for it. “Students can talk to their adviser about signing up or to me directly.”

Among the first students to enroll was Alexis McKenzie, a junior majoring in interpersonal communications. “I was drawn to the minor after taking a black history course with Professor Balto my sophomore year,” McKenzie said. “It was something entirely new to me to talk about black culture in an academic setting. I was fascinated by the content we discussed.”

McKenzie said the African American Studies minor is relevant to students outside of the history program because it offers them an often-ignored perspective that provides an opportunity to better understand the country they live in.

“Our nation’s history is racialized,” the Fishers resident said. “With an event like the incident in Charlottesville, I don’t think you can fully understand the magnitude of its implications without a grasp on the history and current culture of black communities.”

Context in a complex world

Balto is well-suited to lead the program. An assistant professor specializing in African-American history, he has spent years researching the black freedom struggle. He’s a contributor on the topic to media outlets like Time and The Washington Post and in 2018 will release his first book, Occupied Territory: Policing Black Chicago from Red Summer to Black Power.

“We are very fortunate to have him here at Ball State,” said Alves, who praised Balto’s dedication to increasing students’ awareness of the cultural and historical contexts they live in.

“From the Harlem Renaissance and James Baldwin to studying contemporary inner-city community efforts at making this country a better place, he guides them in an exploration of how central African-American history is to everything American.”

Already this semester he’s discussed race and Southern identity with his students, including a recent conversation about the country’s renewed debate to remove its Confederate monuments.

“More students are seeing the way in which these historical topics are still relevant. They’re having a huge impact on current politics and culture, making them issues that are alive in the conscience of college students trying to make sense of the world.” —Simon Balto

Alves considers Ball State’s African American Studies minor a community-building program, one that aims at inclusivity and the elimination of marginalization.

“African-Americans, from W.E.B. Dubois and Zora Neale Hurston to Martin Luther King Jr. and President Barack Obama, have been central to the intellectual and social development of the United States,” Alves said. “But there have been those in our history who have tried to bury this narrative. African-American studies is a corrective to that.” 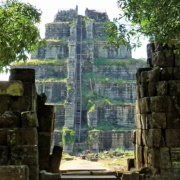 Teacher Improves From a C to an A
0 replies