[dropcap]O[/dropcap]n a tiny farm in a quiet corner of West Quad’s basement, John Pichtel is learning how America’s resurgent energy industry might affect our food.

For more than a year now, the natural resources and environmental management professor has tended dozens of potted plants containing clover, pea and wheat plants, plus other crops, to see how they tolerate water contaminated by chemicals used in hydraulic fracturing, or fracking.

“Fracking has advanced the American fossil fuel industry, but there is a concern that it could be threatening food crops,” Pichtel said. In the worst case, he said, cropland could become barren.

“Right now California, a major producer of our food, is suffering from a serious drought,” he said. “To counter the impact of the drought, some areas are using water containing fracking fluids for irrigation. This practice has been controversial.”

In fracking, energy companies extract natural gas and oil underground by injecting a fluid at extremely high volumes and under high pressure that opens and widens cracks in rocks. The fractured rocks release trapped energy that’s collected at the surface. The fracking fluid contains water and sand but also includes chemicals such as acids, antimicrobial agents and detergents, Pichtel said. Some of the compounds, including antimicrobials and those that raise salinity, might be toxic to plants.

While fracking fluid that returns to the surface is often stored on site before being transported to treatment facilities for salt and chemical removal, many spills have been documented in recent years. The risks to soil ecosystems, including microorganisms and crops, are unclear, Pichtel said.

A 2011 U.S. Forest Service study found a connection between fracking and plant health, according to the Green blog of The New York Times. Almost immediately after fracking fluids were legally applied to a small forest area in West Virginia, nearly all the ground plants died, according to the study’s author and research soil scientist Mary Beth Adams. After a few days, leaves on trees wilted and dropped. Within two years, nearly 60 percent of the area’s roughly 150 trees were dead.

For his project, Pichtel has applied several fracking fluids to soil and plants and is observing the effects; results should be available in a year. The objectives of the study are:

Pichtel said that monitoring both soil and crop effects, and the fate of these chemicals as they enter the environment, is critical to understanding current and future environmental hazards.

“Is there a treatment we can develop to counter this contamination by fracking fluids? We don’t know. We are looking to determine if certain plants can tolerate fracking fluids or if we can treat the soil in order to reduce the salinity and to trap certain contaminants.” 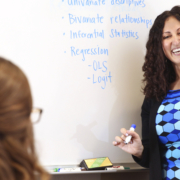