[dropcap]L[/dropcap]auren Baney was many things after camping out for 24 hours this spring at Ball State’s Scramble Light: cold, hungry, exhausted and sunburned.

But the then-senior majoring in health science also knew her role in an anti-human trafficking campaign — one of many events she and other activists have organized on and off campus in recent years — had drawn attention to a problem closer to home than many people know.

“It makes it that much better to feel like you can’t stand for one more minute and that you have given your all for the cause — I was crying at the end,” said Baney, a spring 2016 graduate. “I felt so fulfilled, and I was encouraged by the people who stopped and took time to learn about what we’re doing.”

Baney arrived at Ball State in fall 2012 knowing very little about the illegal trade of people for forced labor or sexual exploitation, a problem that affects hundreds of thousands of Americans and more than 20 million people worldwide, according to the International Labour Organization, a United Nations agency.

Baney spent 24 hours at the Scramble Light as the leader of the campus chapter of International Justice Mission, an activist organization that promotes awareness of human trafficking and other crimes against the poor in the developing world.

Her path to activism on that front — she’s raised money, brought speakers to campus to talk about human trafficking and helped increase awareness here at Ball State and elsewhere — began with a casual decision to attend an on-campus seminar near the end of her freshman year.

“I remember walking out of the building knowing that I wanted to do something and that things were going to be different for me from that point on.”

But Baney’s local focus on an international problem wouldn’t take shape until the following summer, when she worked as a counselor at a residential YMCA camp.

She spent 10 weeks at Camp Tecumseh in Brockton, Indiana. Each Sunday, she met 10 or so new girls in her cabin and, despite not having much time with them, formed friendships.

She also made a chilling connection to the seminar. The 12- to 14-year-olds in her charge were at the age when research suggests they are likeliest to fall victim to the commercial sex trade.

The thought broke her heart even as it steeled her resolve to fight the problem.

So in fall 2013, she joined the group behind that seminar, Ball State’s chapter of International Justice Mission (IJM), whose work involves human trafficking in all forms. She also began to build her own organization for a part of the cause nearest to her heart: the fight against sexual exploitation of girls.

Baney’s time with IJM at Ball State involved more than testing her endurance at the Scramble Light. One example of her dedication came last November, when the group’s national leadership challenged the campus chapter with putting together one event to promote awareness of human trafficking.

Under Baney’s leadership, the 30-plus members of Ball State’s group did seven — all before Thanksgiving — including a self-defense night led by Ball State Police Department officers and a fundraiser at a local frozen yogurt shop.

Through her newly established organization, A Better Tomorrow, she continues to work on raising awareness of sexual exploitation.

In her hometown of Fishers, that work has led to annual benefit concerts at area churches that have grown tremendously over time.

The first year, roughly 100 people endured a snowstorm to attend. The third and most recent gathering — which now includes a fair-trade market and fashion show — drew roughly 700 people. Baney has picked a 2017 date for the event, which has benefited IJM, other groups that fight human trafficking and her bid to turn her organization into a nonprofit. In this setting, Baney pushes beyond facts and figures, creating a live-music journey that begins with the darkness of the crime and ends with a message about the hope of a victim’s recovery.

Her goal with all these events: to emphasize that human trafficking, particularly sexual exploitation, can happen anywhere.

Baney illustrates that point by noting a federal case in which three Muncie-area children were rescued from a suburban Chicago sex-trafficking ring in 2013. Statewide, there have been dozens of criminal investigations involving sexual exploitation and other types of human trafficking during the past decade, according to the Indiana Protection for Abused and Trafficked Humans task force. “The biggest myth is that it’s not happening in America or right here in Indiana,” Baney said.

Baney’s activism goes beyond International Justice Mission. She also has put together events in her hometown of Fishers to promote awareness of human trafficking in Central Indiana.

But numbers only tell part of the story, says one expert whom Baney has brought to campus to speak on the issue.

“(Human trafficking) has existed for a long time. The numbers are outrageous, and they are much larger than anyone realizes,” said Delaware County Circuit Judge Kimberly S. Dowling. “We are just learning and figuring out how to identify victims. … We’re making huge strides in all areas regarding this issue: treatment, legislation and education. And we’re going to have to keep working hard.”

Baney’s devotion to promoting awareness of human trafficking is clear to her IJM colleagues.

“I definitely think that we got the word out to people who may not have known anything about human trafficking,” said Mitch Kissick, a sophomore preaudiology major and IJM member whom Baney enlisted during his freshman year. “It’s easy to be inspired by Lauren because, just by speaking to her, you can easily tell that her heart is in it. Her authenticity and commitment spread through our team.”

She’s spending her fourth summer in a row at Camp Tecumseh, where she is now on the leadership team.

Baney will then begin a new chapter of her life. She’ll head to graduate school this fall to pursue a master’s degree in public health, which she hopes to incorporate into her activism.

Ultimately, her dream is to open a private shelter in Indiana for women and girls who have been victims of sex trafficking.

And though her long-term path isn’t yet carved out, Baney is leaning on the same force in her life that helped her put together her first awareness expo in Fishers and drew her to activism.

“Much of this has been led by my faith,” she said. “It keeps me going and makes the fight that much stronger and more powerful.”

How to report suspected human trafficking

In Indiana: The Indiana Department of Child Services takes reports of suspected trafficking of children: 800-800-5556. 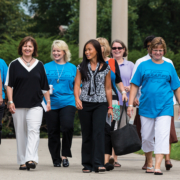