[dropcap]W[/dropcap]hen Linda Taylor found out she might be prediabetic, she didn’t want to face the health problems that members of her extended family had suffered through the years. So, she started walking.

A year later, the 59-year-old assistant professor of elementary education has shed pounds and dramatically increased her energy levels by adding 30 minutes of walking into her daily schedule.

“I didn’t think that simply walking would make such a huge difference, but I feel so much better. Just a few weeks ago, my doctor said all my numbers had improved, and the prediabetic label is off me.”

Most Americans don’t intend to be inactive; it’s often just a byproduct of a 21st-century lifestyle. In fact, we spend nearly two-thirds of each day being still, whether we’re sitting or lying down, Ball State researchers have found.

That hurts our health. So what makes it a challenge to get going?

“Our study found that most adults simply aren’t moving, and that’s because many of our jobs are done in a seated position while working at a computer or something similar. At the same time, much of our leisure time is often spent in front of a screen, such as for TV, social media and smartphones.”

Taylor started increasing her movement a year ago.

“The Teachers College Take the Stairs challenge was the motivation I needed to get out of my office and walk around the building. I met people I don’t typically have contact with, and my competitive side loved being challenged.”

Because of allergy-induced asthma, her lungs get tested periodically. After the stair challenge, they’d improved substantially. That reinforced her change.

“This fall, I participated in the On the Road with the Cardinals challenge, which got me out walking around both my neighborhood and campus. I found the walks were a great way to relieve tension, allow my mind to wander and led me to think more creatively about my work.”

It also helped lower her blood-sugar levels, which led to her doctor’s good news earlier this year.

Get moving every day

“Just because a person exercises for a half-hour or hour every day doesn’t just mean they can be sedentary the rest of the time,” he said. “We have to get up and get moving throughout the day to maintain good health.”

The study analyzed data from about 300 adults, ages 19-90, who participated in research conducted by Ball State’s clinical exercise physiology program during the last several years. Electronic measuring devices strapped to participants’ hips tracked their movements 24 hours a day for a week.

Montoye notes that in the past decade, the understanding of sedentary behavior’s harmful effects has grown, and its association with poor health is becoming well-established. Increased sedentary behavior has been linked to an increased risk of obesity, diabetes, cardiovascular disease, colon and rectal cancers as well as premature death.

Experts recommend short bursts of exercise at the computer as a way to stave off the ills of sedentary behavior.

Because sedentary lifestyles are bad for modern workers, employers paying health insurance premiums need to address the issue, too, said study co-author Lenny Kaminsky, director of the university’s Fisher Institute of Health and Well-Being and the John and Janice Fisher Distinguished Professor of Wellness.

What can you do

To reduce time on the couch at home or in a chair at the office, the research team recommends average adults modify their routines by:

“Since we live in a society where work is now done at a desk, it is very important that we make small changes in our daily habits,” Montoye said. “Those little changes will make a big difference over time.”

Tracking devices may be a key

Tuttle worked with participants as they used the electronic measuring devices as part of collecting data. She believes the rising popularity of wearable fitness trackers should spur people to become more active.

“These monitors easily allow people to see what they are doing. That is part of creating a behavioral change that will improve their lives.”

The study, “Variability of Objectively Measured Sedentary Behavior,” has been posted in the online edition of Medicine & Science in Sports & Exercise, the official journal of the American College of Sports Medicine.

Taylor plans to keep up the walking routine in her favorite shoes.

“I’ve walked in all sorts of weather and love to go over to Studebaker East on the nice days because it’s such a beautiful area. But you won’t see me at the mall because I love to shop too much. That would cut into my walking.” 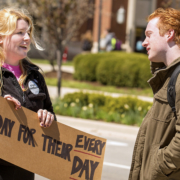