[dropcap]W[/dropcap]hen Mike Neu was named Ball State’s head football coach in January, it didn’t take long for him to revisit the place closest to his heart.

“One of the first things I did when I got back was to walk out on the field and look at where my late father always sat during my playing days,” Neu said. “He never missed a game, and I will never walk out there without thinking of him.”

The durable Cardinals quarterback didn’t miss many games either, having started 38 of 41 games during the 1990-93 seasons. Among his many honors as a player were the Mid-American Conference’s Vern Smith Award as the league’s most valuable player and the MAC Offensive Player of the Year Award, both as a senior.

He returns to his alma mater after roughly two decades of playing and coaching, most recently as quarterbacks coach with the National Football League’s New Orleans Saints.

“I always kept up on the fortunes of the team,” said Neu, an Indianapolis native and graduate of Perry Meridian High School. “I always kind of hoped there might be a chance for me to return someday as coach. This is a very special place for me.”

After graduation, Neu played professionally in the Canadian Football League and the Arena Football League. He also amassed 15 years of coaching experience with stints in the NFL, Division I Football Bowl Subdivision (formerly Division 1-A) football and the Arena League. The past two seasons were Neu’s time with the Saints.

“Preparation is something I’ve always stressed to my players, and I’m hopeful my coaching career to date has prepared me well to come home to Ball State,” said Neu. “I think we’re going to put an exciting team on the field.”

Neu says the Cardinals will play an up-tempo style.

“We’re looking to go fast on offense,” he said. “Spring practice will give us an idea of just how that can play out on the field, but we want to keep the opposing defenses in a bind. From what I’ve seen so far, I’m optimistic.”

Ball State will open the 2016 season Friday, Sept. 2, in Atlanta against Georgia State and will then make the short trek from Muncie to Bloomington on Saturday, Sept. 10, to renew its rivalry with Indiana University.

“We’re squarely focused on Georgia State and not looking past that game,” Neu said. “But at the same time, we’re also excited to have IU back on the schedule. Their program has really made some big strides of late, and it’s going to be fun. We know a lot of our fans will make the drive and come down to support us.”

And when the Cardinals are home in Scheumann Stadium, engaging the fan base is one of Neu’s top priorities.

“We are looking at everything, the entire experience, to engage our fans,” he said. “We want Ball State football to be fun, from tailgating to the in-stadium atmosphere to the crowd interaction with our players. At the same time, we understand the critical importance a winning, dynamic team plays in all this.

“We know there’s a solid football fan base at Ball State,” Neu said. “We’ve seen the stadium full a lot of times. And at this point, I just want our fans and students to know we want you there, and we’ll do all we can to justify your faith in us.”

Neu’s wife, Charmin; daughter, Graycen, 15; and sons Carson, 14, and Chase, 6; will be joining him in Muncie this summer.

“My family is still in New Orleans, but I expect that we’ll have a house purchased here by the time our kids get out of school down there,” Neu said. “Like me, they’re ready to get everybody settled here and get things moving.” 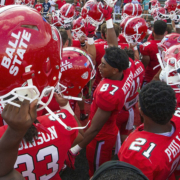 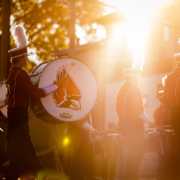 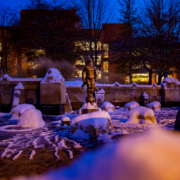 The Month in Photos: November 2019 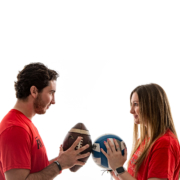