Blog
You are here: Home / Blog / Digital Exclusives / The Month in Photos: November 2019

Each month, Ball State’s photographers capture hundreds of moments on and around campus. Here are some of the staff’s favorites for November.

Frog Baby triumphantly endures the first snowfall of the season on November 12. In 1994, the University moved the statue from the David Owsley Museum of Art to a new fountain north of Bracken Library. (Photo by Samantha Strahan)

At the Letterman Building, the campus community celebrated the achievement of Ball State students becoming the first collegiate team in Indiana, the Midwest, and the Mid-American Conference — the fifth university team in the world — to certify that an existing building meets the Leadership in Energy and Environmental Design (LEED) standards of the U.S. Green Building Council. In the future, student teams will audit other buildings on campus and verify that they meet LEED standards. (Photo by Madeline Grosh)

Every Breath You Take

The temperature at kickoff between the Ball State Cardinals and Central Michigan University Chippewas on November 16 hovered just above freezing. As the breath of this hard-working Cardinal met cold air it condensed into vapor. (Photo by Lucinda Stipp)

She Has the Voice

Alumna Lauren Hall, ’16, returned to her alma mater to perform at halftime of the women’s basketball game on November 20. Hall, who played soccer at Ball State, was a crowd-favorite contestant on season 17 of  NBC’s The Voice. (Photo by Don Rogers)

Aaron Lor proudly participated in the University’s “I Am First” celebration in L.A. Pittinger Student Center, showing he is among the first generation in his family to go to college. Adam is a master’s student in student affairs administration in higher education and an assistant residence hall director. (Photo by Don Rogers)

Sittin’ on the Dock of the Bay

Darrin Sims enjoys the view of Lake Ontario after visiting The Harbourfront Centre in Toronto, Canada. He was part of a class research trip to visit Toronto’s various makerspaces as part of a fellowship with Virginia Ball Center for Creative Inquiry. (Photo by Samantha Strahan) 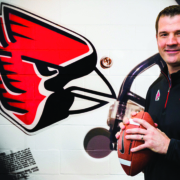 Mark Mayer: Advertising for a Better Society
Scroll to top