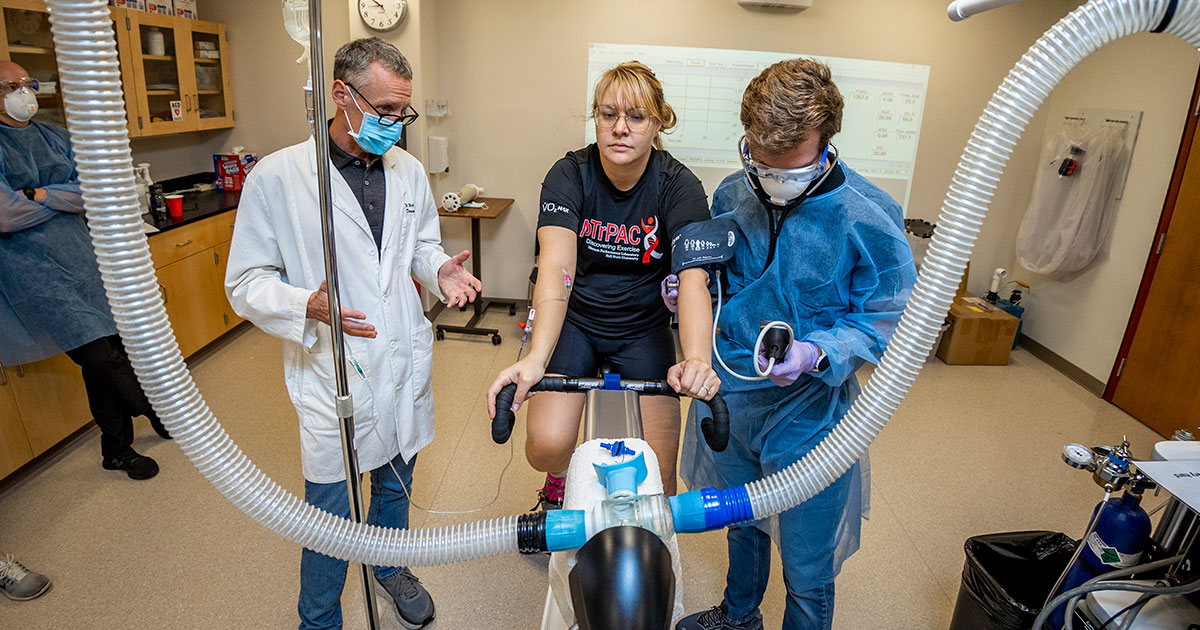 Ball State’s Human Performance Laboratory (HPL), led by Dr. Scott Trappe (left), is serving as a Human Clinical Center for the MoTrPAC study. HPL researchers and students are working with about 200 local participants on a 12-week exercise program.

Scientists have long wondered how exercise influences the body on a molecular level. To answer that question, Ball State’s Human Performance Laboratory is part of a national consortium of universities and hospitals conducting a major federal study.

Eventually, the project may help develop protocols to help people use exercise to combat disease and aging.

The HPL is fully integrated into the 32-university Molecular Transducers of Physical Activity Consortium (MoTrPAC), the largest exercise research program of its kind, aiming to recruit approximately 2,600 research volunteers across the country.

Ball State is one of the Human Clinical Centers for a key portion of the study, working in partnership with the University of Alabama at Birmingham and the Translational Research Institute at AdventHealth. Dr. Scott Trappe, PhD ’94, the HPL’s director, is the principal investigator of the test site; Dr. Todd Trappe, PhD ’96, a Ball State exercise science professor, is a co-principal investigator for the site.

“We know being physically fit provides substantial health benefits, but we don’t know all the reasons why, especially at the molecular level,” said Dr. Scott Trappe, a senior author of “Molecular Transducers of Physical Activity Consortium (MoTrPAC): Mapping the Dynamic Responses to Exercise,” the consortium’s first major joint paper.

The largest part of the study provides detailed information on how human bodies respond to exercise while accounting for person-to-person variation and revealing differences based on participant demographics like age, race, and gender.

Researchers within MoTrPAC measure molecular changes in participants before, during, and after exercise to build a comprehensive map.

“This is really the moonshot for the understanding of how exercise works from a molecular standpoint,” Dr. Scott Trappe said. “It is one of the most intense and important projects HPL has participated in since the creation of the lab in the 1960s.”

Dr. Trappe said the paper—which was published in Cell, a peer-reviewed scientific journal—explains the program’s organization and clinical study protocols. Work was conducted as part of the MoTrPAC funded by the National Institutes of Health under award number U01AR071133.

HPL researchers, along with master’s and doctoral students, are working with about 200 participants over the next four years. Participants are being drawn from East Central Indiana. 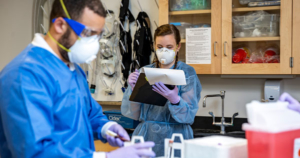 “We are seeking athletes to come into the lab for testing, and then begin to enroll healthy non-exercisers to participate in a specially designed 12-week exercise program,” Dr. Trappe said. “We are going to teach people how to properly exercise using our new exercise equipment, which ranges from stationary bikes to resistance machines.”

Sedentary adults and low-activity children have been randomly assigned to an inactive control group or to groups that complete a 12-week exercise regimen that gradually increases in intensity. Adults are doing either endurance or resistance training, while children are doing only endurance training.

When the study is complete, MoTrPAC will deliver a map of the biological molecules and pathways underlying the systemic effects of acute and chronic exercise. The data, which will ultimately be made freely available to the scientific community, will provide unprecedented opportunities to begin to understand the pathways by which physical activity influences health.

In the future, Dr. Trappe said the knowledge gained will allow researchers and health professionals to develop personalized exercise recommendations and provide insights into molecular targets that could be manipulated to mimic some of the effects of exercise in people unable to do so.

“So far, this has been incredible teamwork because the amazing, talented people coming together to participate in this study,” he said. “I believe that over the next four years, our understanding of how the body benefits from exercise will increase dramatically—allowing us to better understand how we may improve our health.”

One day, Colleen Lynch is responsible for blood processing work in the biochemistry lab. The next, she’s managing timing and data sheets in the biopsy/training room.

Then there’s Andrew Stroh, who serves as a master timer and data recorder on trial days, taking detailed notes and helping guide the process along.

Ms. Lynch and Mr. Stroh, both of whom are pursuing their doctorates in Human Bioenergetics, simply aren’t spectators when it comes to one of the largest studies in the history of their field. They are active participants.

To Dr. Trappe, when it comes to the importance Ball State places on hands-on learning experiences, “it doesn’t get any better” than the work being done on the MoTrPAC study by Ball State master’s and doctoral students.

“For them, it’s just the training,” Dr. Trappe said. “Our students have always had hands-on training, so at the core of it, that part is the same. I think the part that changes a little bit is the magnitude of it. Students oftentimes apply to come here because of the reputation of the lab and the projects that we’re working on, but in this particular context, we can cast that net even wider to where they’re involved with the consortium, and they’re seeing how this works. They’re making connections as students because they’re involved in a variety of meetings, video calls, and contributing to the various working groups in the consortium.

“So I think for them the experience is invaluable on multiple levels,” Dr. Trappe continued. “And then as they go and move on to the next level, people see the experience they have working within the boundaries of MoTrPAC, which certainly, I think, adds to their overall training and skillset, and hopefully they’re more attractive to employers on the other side.”

Ms. Lynch, a Davidsonville, Maryland, native, received bachelor’s degrees in Exercise Science and Interdisciplinary Studies (with a focus in Biology, Chemistry, and Psychology) from Salisbury University. She then joined Ball State’s HPL and earned her master’s in Exercise Physiology in the Summer of 2020.

She said her hands-on experience with the MoTrPAC study has been “very eye-opening.”

“Being part of such a large consortium study makes you realize how much goes into each and every decision,” Ms. Lynch said. “It also provides great insight into all aspects of the research process, from lightbulb ideas to troubleshooting analysis and everything in-between.”

Mr. Stroh has been a Ball State student since 2017, when he started pursuing his master’s in Exercise Physiology. He has seen the MoTrPAC study develop almost from the ground up, and considers the project “special to be a part of.”

“Within the field most everyone will know of MoTrPAC, and given its size and significance it will continue to be relevant for quite some time,” said Mr. Stroh, a Columbus, Ohio, native who earned his undergraduate degree in Biology at Capital University in 2017 and his master’s from Ball State in 2019. “Given all the different roles and exposure we students get, the experience will help us no matter what we do next. Even if it’s not working within a big consortium study, the skills of following protocols, providing input, and working to make all these moving parts work smoothly will translate to any potential job in the future.” 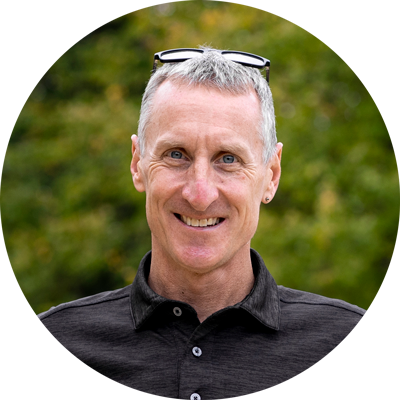 “I believe that over the next four years, our understanding of how the body benefits from exer-cise will increase dramatically.” — Dr. Scott Trappe

1980: The State of Indiana approves a PhD program in Human Bioenergetics to be housed at HPL.

2001: HPL begins to study astronauts on the International Space Station.

2011: HPL is funded by the National Institutes of Health to study benefits of lifelong exercise.

2016: HPL is selected as a Human Clinical Center for the Molecular Transducers of Physical Activity Consortium (MoTrPAC) project, the largest exercise research program of its kind.

According to Dr. Scott Trappe, grant funding has transformed Ball State University’s Human Performance Laboratory (HPL) in the last several years into a unique and comprehensive exercise physiology center where researchers collect data from the whole body to the level of the gene.

Dr. Trappe, the HPL’s director, noted that Ball State was selected for the 32-university Molecular Transducers of Physical Activity Consortium (MoTrPAC) project because of its long history of groundbreaking research into the effects of exercise on the body.

“Over the last decade, we’ve been involved in several studies, including elite athletes, NIH-supported aging studies, and NASA studies involving members of the International Space Station and before that, American astronauts on the space shuttle,” he said. “The Lab has a long history—over 50 years of being at the forefront of exercise physiology research. It’s great to be involved.”

Dr. Trappe said the recognition gained from being involved with the MoTrPAC study certainly is noteworthy, but even more important is the work being done to prepare future leaders in the field of exercise science.

“It’s just a wonderful training ground for new students,” he said. “One of the major goals of MoTrPAC is to train the next generation of scientists in the field, and we’ve got multiple graduate students—10 or 12—that are involved every day, getting hands-on experience, helping us execute the MoTrPAC protocols. So, they’re getting a front-row seat to how a big consortium like this works.”

New men’s basketball coach is all in Scroll to top