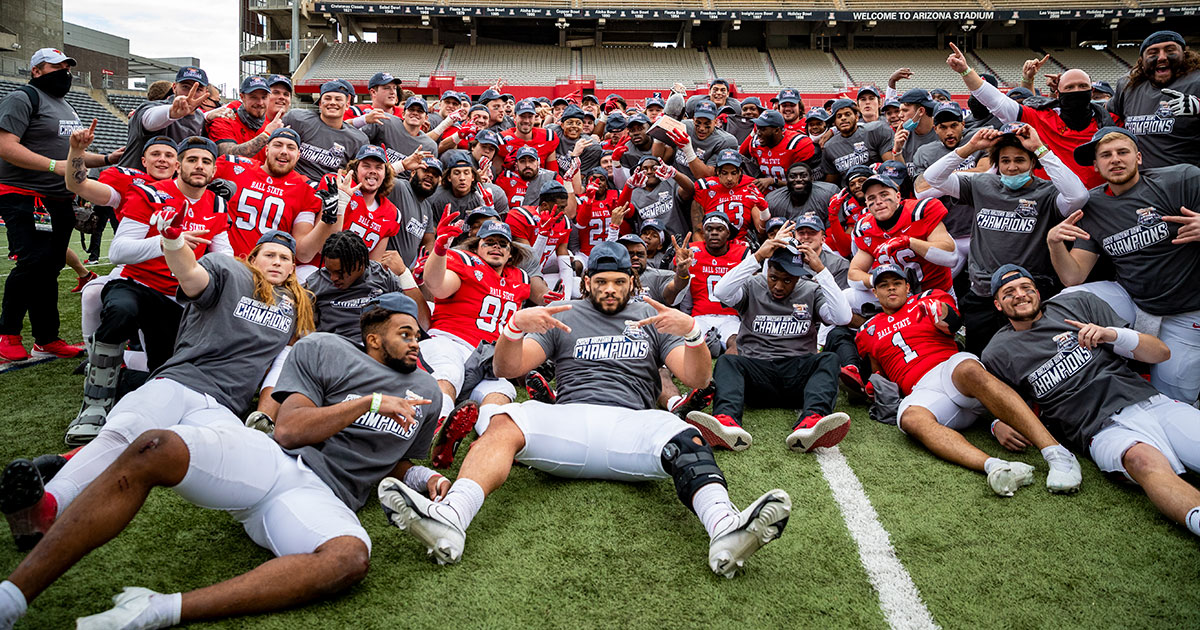 Cardinal players celebrate their Arizona Bowl victory that capped a seven-game winning streak, including a MAC title—achievements placing the team among the greatest in Ball State history.

To say there’s a ton of optimism around the prospects for the 2021 Ball State football team would surely qualify as an understatement.

Adding to the optimism is the fact that 20 starters from last year’s team will return this upcoming season.

“We never take anything for granted, but we’re very hopeful and can’t wait to get going,” said Mike Neu, ’94, head football coach since 2016.

“This is a well-grounded team, and a team that’s working harder than any I’ve had here in the past. I can promise our fans we’ll not be resting on our laurels.”

Of the 20 returning starters, 16 are seniors from last year who took advantage of an extra year of eligibility offered by the NCAA because of the COVID-19 pandemic.

“If you follow college football, you know the transfer portal is very active,” Neu said. “The fact that these seniors want to be a part of Ball State football again is something we all greatly value and appreciate.”

Quarterback Drew Plitt is among those 16 seniors and will be leading Ball State as the starter for the third-consecutive year.

“Drew just makes everyone around him better,” Neu said. “I can’t even begin to put into words how important it is to have him with us again.”

Adding to the excitement is the opening of the Scheumann Family Indoor Practice Facility.

“It’s one of the best indoor football practice buildings I’ve ever seen,” Neu said. “It’s simply a game-changer for us.”

The non-conference portion of the Fall schedule includes the first trip in school history to Big 10 powerhouse Penn State, as well as a trip to Wyoming. And for the first time since 2013, the Cadets of Army will return to Muncie to face the Cardinals in Scheumann Stadium.

“No doubt we have a challenging non-conference schedule, and our MAC schedule is always tough,” Neu said. “But that’s how we want it, and I think the fans are in store for some great football.”

Speaking of fans, Neu remains hopeful the COVID-19 situation will allow as many as possible into the stands in 2021.

“As of right now, we don’t know how the Fall will look in that regard,” he said. “But we do know our fans are the lifeblood of our football team, and let’s hope we can welcome them back in big numbers.”

New Alumni Leader Shares Why Staying Involved Is So Important