Alumnus Works Around the Clock on Cure for COVID-19 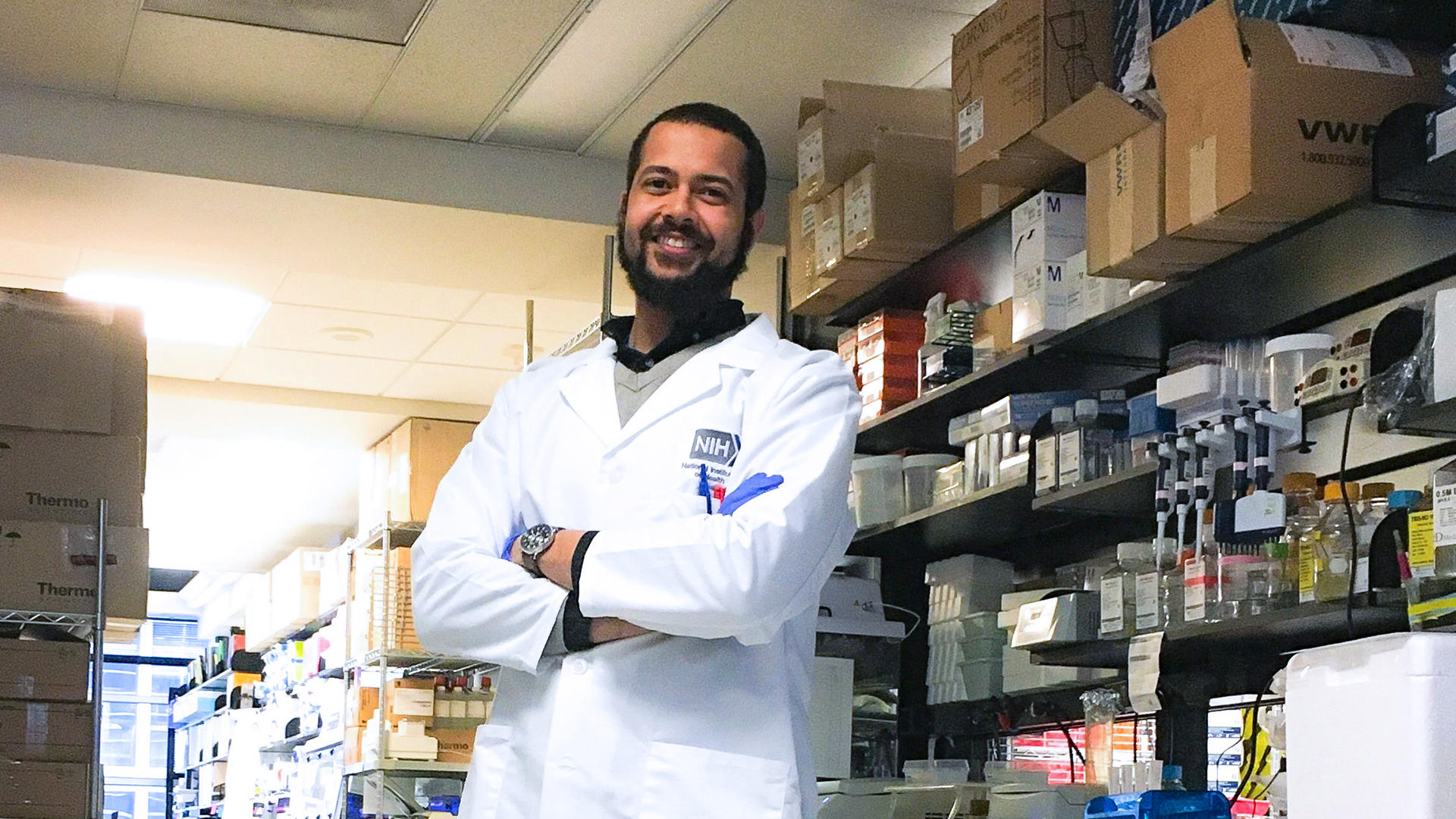 Ball State University alumnus Geoff Hutchinson, who studied biochemistry and pre-medicine, has been part of a National Institutes of Health research team working to develop a vaccine for COVID-19.

From 2014 to 2016, Ball State University alumnus Geoff Hutchinson was a Peace Corps volunteer, teaching chemistry in Mozambique. There, he saw the burdens caused by infectious diseases and pledged to do something to help.

The 2014 Ball State graduate is fulfilling that promise. Today, Hutchinson is on the front lines in the battle against the coronavirus, working around the clock with scientists at a research center operated by the National Institutes of Health (NIH) outside of Washington, D.C

As a postbaccalaureate research fellow, Hutchinson is part of a team working to develop a vaccine for the virus as researchers transform mountains of data into an understanding of how the disease is spreading and how it can be stopped.

“We often come into the lab at 7 a.m. and don’t leave until midnight,” said Hutchinson, who studied biochemistry and pre-medicine at Ball State.

It’s the first thing you think about when you wake up and the last thing at night before you go to sleep. We want to be the first to get this thing solved, but we can’t take any shortcuts. We have to be right.

Take a Protein, Put it on a Plate, then Test

Hutchinson was recently featured in a nationally distributed newscast showing him working on vaccine research related to the novel coronavirus that causes COVID-19.

“I was doing a demonstration of a typical experiment that tests if we can get responses from the mouse immune system,” he said

Hutchinson describes his role in the research in simple terms: taking a viral protein, putting it on a plate, and then testing to see if the blood has developed antibodies against it.

The VPL’s goal is to better understand basic aspects of viral pathogenesis and apply that knowledge toward development of safer and more effective vaccines. Defining how viruses cause disease requires investigation of functional and structural features of the viral pathogen, as well as studies to determine mechanisms for regulating the composition and timing of the host immune response.

Up to the Task thanks to Undergrad Experiences

Hutchinson said that the learning curve in Graham’s lab was steep, but he relied on knowledge and skills he learned from Ball State to push through and make meaningful contributions.

The VPL coronavirus team has already developed a vaccine candidate in response to the COVID-19 outbreak. Phase I Clinical trials are now enrolling through Seattle-based Kaiser Permanente Washington—but it will be many months before it is determined if the vaccine is safe and effective.

“My time at Ball State prepared me well for this step in my career,” said Hutchinson, who cited many similarities between his current work and the research he was doing as an undergraduate.

“But the stakes are much higher now.”

That Hutchinson has proved he is up to the task is no surprise to Patricia Lang, a chemistry professor who served as his research mentor at Ball State when she first noticed his dedication and attention to detail.

During this time, Geoff was funded by the National Science Foundation’s Louis Stokes Alliance for Minority Participation grant, according to Lang, who described Hutchinson as “one of my favorite undergraduate research students.”

Ever since I’ve known him, I’ve admired how he works toward his goals, improving upon his expertise and adding to his set of skills each year.

“I am grateful for the Midwestern mentality that Ball State helped shape,” added Hutchinson, who came to Muncie in 2010. “I am a people person. That makes it easier to work with and collaborate with people from all over. Ball State also helped me by showing how to take life in stride. If I don’t know the answer, I ask. I’m not ashamed of that.”

After three years in the Intramural Research Training Award (IRTA) Fellowship Program, which is designed to provide advanced training and practical research experiences to investigators early in their professional research careers, Hutchinson’s next step begins in the Fall when he moves to the University of Washington to start a doctorate in immunology. He knows his current experience will be helpful in his future education and career, but most important to him now is helping deal with a growing national crisis.

“I know people are getting scared out there,” Hutchinson said. “I am just glad to be a part of what we all hope will be a solution to this.”

Gabriel Tait: Teaching a Broader Worldview Through the Lens of Journalism

4 Ways Students and Faculty Have Innovated and Collaborated on Learning in Response...
Scroll to top