Blog
You are here: Home / Blog / Digital Exclusives / The Month in Photos: February 2020

Each month, Ball State’s photographers capture hundreds of moments on and around campus. These are some of our favorites from February.

A morning sky’s pastels color the start of a brand-new day of Beneficence at Ball State. (Photo by Don Rogers)

A recent snow creates a peaceful scene with these evergreens nestled up to the eastern branch of York Prairie Creek on campus and the walking bridge over it near Jo Ann Gora Student Recreation and Wellness Center. (Photo by Don Rogers) Ball State’s women gymnasts triumphed in one of their closest meets this season by beating Kent State at home Feb. 23 at Worthen Arena. It was a dandy gift for Alumni Day, with the Cardinals winning by just 0.125 points. (Photo by Bobby Ellis)

Jarron Coleman celebrates after scoring two of his 19 points against Eastern Michigan at home Feb. 22. It was the guard’s second-best point total this season. Coleman, redshirted as a freshman, was an Indiana All-Star as an Indianapolis high school senior. (Photo by Bobby Ellis)

Newly elected Board of Trustees officers included alumna Renae Conley, who succeeds Rick Hall, ’89, as chair and is the first woman to serve in the position. Hall will continue on the board. President Mearns and Conley thanked Hall for his leadership in vital initiatives such as the University’s historic partnership with Muncie Community Schools. Conley (shown front row, second from right) also has deep ties with the Muncie community as a graduate of Burris Laboratory School and of Ball State, with a bachelor’s in accounting in 1980 and an MBA in 1982. (Photo by Don Rogers)

Sophomore outside attacker Kaleb Jenness serves against No. 6 Lewis University in Worthen Arena. Jenness is from Mount Pleasant, South Carolina. Because there’s no high school boys volleyball in the state, he played club volleyball before Ball State—and is the first men’s Division I volleyball player from South Carolina. (Photo by Samantha Strahan)

As part of the ongoing “Stars to Steer By” series, a College of Sciences and Humanities event, brought three humanities alumni majors to campus. They spoke to students Feb. 13 about how they have successfully pursued legal careers after graduation. (Photo by Rebecca Slezak)

As part of a physical fitness and wellness class, students spend two weeks at a time studying and implementing a new form of fitness, such as cardio kickboxing. (Photo by Samantha Strahan)

Students got in the spirt of fun and excitement for a good cause at the annual Ball State University Dance Marathon at Jo Ann Gora Recreation and Wellness Center on February 15. The student-driven, year-round commitment generates funds for Riley Hospital for Children in Indianapolis. It culminates in a continuous, multihour fundraiser that blends games, music, dancing, and philanthropy. (Photo by Bobby Ellis)

Tired but happy, students celebrate the success of the 13-hour Dance Marathon that raised $566,207.20 for Riley Hospital for Children this year. In 2008, Ball State Dance Marathon became a campuswide student organization. Ball State University is one of more than 150 universities and high schools around the country to host a Dance Marathon for a Children’s Miracle Network hospital. (Photo by Bobby Ellis) 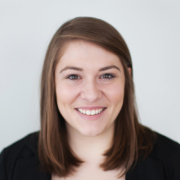 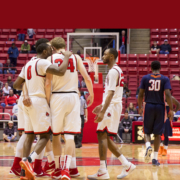