[dropcap]F[/dropcap]or Ball State acting majors, Jesse Tyler Ferguson’s two-day campus visit in December was full of advice for their performances and their prospects.

They gleaned helpful hints from his Friday night chat in Pruis Hall, then got him all to themselves the next day for a nearly two-hour master class. The man who plays Mitchell Pritchett, the gay lawyer/dad on “Modern Family,” listened to each of the 13 senior acting students perform a short monologue from a play. After he offered suggestions and often posed questions, each student performed again.

One reason he was invited is his success on stage and TV, said Bill Jenkins, chair of the Department of Theatre and Dance. Ferguson’s won four Screen Actors Guild awards as part of the “Modern Family” ensemble, two Drama Desk awards for his Broadway work (including the Tony-winning “The 25th Annual Putnam County Spelling Bee”) and is a five-time Emmy nominee for “Modern Family.” Jenkins said that Ferguson’s activism in the LGBTQ community also was a draw.

The actor’s advice — such as silence and stillness can speak volumes and you need to pick words in a sentence or phrase to land on — may not have been new. But the quiet room made it clear that students were ravenously consuming every word. He worked so easily and quickly that four lucky juniors also performed.

About halfway through the session, he modesty asked the group, “Is any of this helpful?” The reply was raucous laughter and shouts of “Yes!”

Here’s what some of the seniors performed and learned.

Ferguson listens intently as Alexandria Hudson tells him the story in her monologue. She said the department has helped her become a grounded actor, hard worker, kind friend and free thinker.

After Alexandria did her first version of Rose’s monologue from “The Night Season,” Ferguson asked if she’d be comfortable if he sat across from her the second time. She was, and he asked her to again tell him Rose’s story about the day that ballerina Anna Pavlova died and how the ballet she was to be in that night went on, with a spotlight taking Pavlova’s place.

Alexandria said that with his one-on-one coaching, “I learned that partnering is the most important aspect of acting. You have to give so much of yourself when you act, and all of that energy must land somewhere.”

The Carmel, Indiana, resident said that because the department is passionate about bringing in successful actors, she expected she’d get to work with someone of Ferguson’s caliber.

Dakota had worked for months on his piece from “Polaroid Stories,” a play about homeless youth and their mythical and real-life stories. When he finished, Ferguson gave him the height of acting praise: “That felt real, not written.” Ferguson advised Dakota to flesh out the parts, and the resident of Fort Wayne, Indiana, said, “I learned that there are always new ways to approach a piece. Sometimes you need a fresh perspective to see them.”

Jacob was one of two students who got unexpected … let’s call them bonuses. Ferguson took a gentle pass on Jacob’s initial offering and asked if he’d been working on anything else. That’s sort of like asking a surgeon to switch in the middle of one surgery to another she wasn’t planning to do that day. But Jacob went along.

“I was ready for it,” he said. After briefly pausing, he went right into a cutting from the Malcolm and Macduff scene in “Macbeth”, which he and Cody Alexander performed as juniors in an acting class.

Ferguson — who admitted to being scared of Shakespeare at his first professional job, New York City’s Shakespeare in the Park — gave Jacob quite a compliment: “Duuude, you’re a Shakespeare actor!” That resonated with the resident of Frankfort, Indiana, who said he’s “transported with the textual beauty of Shakespeare’s written words.”

And he was glad to get to perform a second piece. “Sometimes you have to fail to get further ahead, and working with Jesse exemplified that for me.”

Gardy’s first choice also was from “Polaroid Stories.” Ferguson wasn’t keen on the cutting, which was based on one youth’s lies, so he asked Gardy if he could do something else.

“Ah! This was unexpected,” the Cincinnati resident remembered thinking, “and I do not know what to do!” But he said he “quickly cycled through my monologues in my head and determined which piece could be seen on the spot.” That all took mere seconds. His next piece, from “Love/Sick,” was about a man who physically can’t hear his boyfriend say “I love you.”

Ferguson suggested slowing the pace so the words and emotions had more time to register. Gardy said he also learned that silence can be powerful in a piece.

Students flocked to gather in front of the recital hall stage after Ferguson asked for a selfie with them. He tweeted a group photo and thanked students later that day.

Jacob’s “Macbeth” classmate did an intense turn as a tall, imposing bad cop in a dictatorial state. The resident of Hagerstown, Indiana, straddled a chair while explaining his use of excessive force in a cutting from “The Pillowman.” For his second run-through, he used Ferguson’s suggestion of making a break at the start of this phrase: “Now, is this kind of behavior in an officer of the law in some way questionable morally?” The change to a less forceful tone immediately made the performance more nuanced — and ultimately scarier.

Annie got the biggest unintentional laugh of the session. In her monologue from “All This Intimacy,” she portrayed a rather frantic woman right before her wedding. “When Jesse Tyler Ferguson worked with me and gave me notes, the monologue seemed to come to life and it became hilarious!” Annie said. “Ferguson had a welcoming ease about him. He allowed me to explore my piece with confidence and freedom.”

Adding to the words’ fun was a slight gaffe by the resident of South Bend, Indiana. When a line ended with “to get married,” and she wanted to show off the character’s engagement ring, she shot her right hand high above her head. The audience laughed, and she quickly knew what had gone wrong. She switched, launching her left hand up, and brought the house down.

Confessions of a Funny Man

Jesse Tyler Ferguson began his visit by sharing entertaining and heartfelt admissions to moderator Bill Jenkins, chair of the Department of Theatre and Dance, and a wildly cheering Pruis Hall crowd. Here are some highlights. 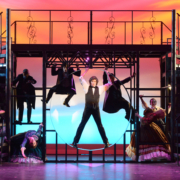 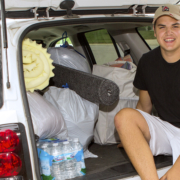 Architecture Student Hopes to Make Her Passion a Career