Blog
You are here: Home / Blog / More / With Ball State’s Help, a Vet Surmounts Adversity and Makes a New Star...

[dropcap]E[/dropcap]arly most mornings there’s a moment, just barely as long as a heartbeat, when twisting Tennessee roadways turn almost hypnotically purple. A day’s first light refracts off fog hanging heavy in the hills, and long-haul drivers like Eric Gentry struggle to explain the magic to the uninitiated.

From inside the cab of his rig, Gentry, 46, traversed coast-hugging highways and desolate desert byways, capturing images in his mind as he drove. The often-isolated roadways were a perfect parallel to the wide-open skies Gentry flew during his time in the military, where the vastness of a faraway horizon seemed nearly incomprehensible.

The rhythm to both careers supplied direction, purpose, meaning — it was work that made Gentry proud.

“I always liked driving, because to me, it’s not something that everybody can do,” said Gentry. “Same as being in the service. It takes a discipline — I guess is how I’d explain it. A different kind of strength. I loved my time in the Navy, I was a Seabee – the construction group that assists the Marines. I loved my time on the road.”

But after almost two decades in the driver’s seat, Gentry found himself taken for a ride by his own body, betrayed by diabetes and the injectable insulin he uses.

“That was it. I was 19 years on the road, and then it was over. It was pretty devastating for a little while there.”

The man who’d always been able to find his way was lost.

Beaten but not broken

With his Ball State commencement days away, Gentry can’t help but reflect on how far he’s come. He is the first to say he didn’t make the journey alone.

“He showed up at my door beat down,” said retired Air Force Master Sgt. Ralph Smith, educational specialist for Veterans Upward Bound, a national organization with an office in Muncie. “Here’s a man who suddenly sees no way to provide for his family. Our first encounter, it wasn’t about showing him the light at the end of the tunnel; it was first showing him the tunnel.”

“I wouldn’t have believed I could do this. I feel like now I can handle adversity and obstacles. I’m excited for the future. And I’ll never give up.”
— Eric Gentry, ’17

The pair made a plan, which for Gentry meant education. He’d completed high school more than 20 years earlier, so the idea of going back to school was exciting but a little daunting.

Still, Smith said, Gentry—like hundreds of others who’ve come for help—simply said, “What do I need to do?”

“I’ve had probably 1,500 Erics standing in front of me,” Smith said, referencing all the work he’s done over the years with veterans who are unsure of their next steps. “It’s just that everyone’s starting point is different. Some are starting from inside a jail cell; some are starting out unemployed.”

Gentry enlisted in the U.S. Navy upon graduation from Wapahani (Selma, Ind.) High School in 1989. One of the prettiest places he ever visited, he said, was Diego Garcia, in the Indian Ocean.

And some like Gentry are starting from a place that defies definition. It wasn’t just a job that Gentry lost. The list — and it takes a list to get through it all — is the kind of thing that would be rejected as too over-the-top for fiction, let alone real life.

As a baby, Gentry had brain surgery to remove an abnormal growth at the base of his skull. Fast forward two decades to his time in the Navy, and Gentry’s unit missed deployment to Desert Storm by two weeks. But dodging that firestorm resulted in Gentry being in the Philippines when an erupting volcano forced an evacuation by the U.S. military installed there. He severed several tendons in the evacuation and lost enough blood that medical responders weren’t sure if he would live.

He made it out and left the service, eager to start a life back in Indiana. Here, he married, welcomed a son, Jacob, and soon a daughter, Autumn. But only three days after Autumn’s birth, the family was burying the little girl, who died from Group B Strep infection. The couple’s marriage didn’t weather the loss of the child, and Gentry became a single parent to Jacob. The character building wasn’t done for Gentry — he filed for bankruptcy three times to salvage what he could.

Amazingly, Gentry is philosophical when he considers his life.

“I always think that there are people out there who have it far worse than me. I think about women in some countries who are treated like dogs, worse than dogs really. Now they have it bad. I’ve never had it that bad, because to me, you just have to keep going. And I had, and have, the chance to do that.”

Opportunity came first in the form of a junior college that then led to his transition to Ball State and the pursuit of a four-year general studies degree. For that, Smith connected Gentry to Michael Black and Kurt Noel, the Veterans Affairs experts on campus.

“There is nothing those guys wouldn’t answer for me,” Gentry said. “They help us veterans out in any way that we need.”

Black and Noel are veterans themselves and appreciate the unique challenges that come for students who have served.

“One of the things that makes Eric successful is that he’s not afraid to reach out when he needs help,” said Noel, Veterans Affairs benefit coordinator.

A university setting can have special challenges for men and women who come to campus with a career already behind them. A traditional student may be interested in, and eager to acquire, some of the quintessential college experiences like those offered in a club. A veteran, though, has likely traveled around the world and may have seen combat, so opportunities offered through a student group might not seem relevant.

One key to Gentry’s success is the time he spent in the Writing Center with tutor Andrew Wurdeman, left. “No matter how many times I went in, they were there to help and encourage me,” Gentry said.

“A typical vet sees school as a mission that needs to be completed,” said Black, assistant director of Veterans Affairs.

Noel added, “Eric’s an example of exactly how the system should work. He embraced the system and looked to us for guidance but not for us to do it for him.”

For Gentry, getting it done meant spending hours in the Writing Center, completing the Writing Proficiency Exam requirements.

“Working with Eric was rewarding because of his initiative,” said Andrew Wurdeman, a graduate assistant in the center who coached Gentry through the program. “He didn’t wait to be told what to do. He sought out the information about the grade he wanted from his instructor. With that information, he used the university’s resources to help achieve that goal. I think students can and should learn from his initiative.”

That work ethic came with Gentry into Kendra Mann’s communication studies class, too.

“Eric’s warm, cheerful and positive personality is just infectious,” Mann said. “He was so fun to have in class because he had so much life experience to share with his classmates. He’s one of those people that leaves a lasting impression.”

“The great part about having Eric in class was that he always had an experience ready that would tie our topic for that day or week to ‘real life’ or life outside of being a student. Not only did I appreciate this as an instructor, but Eric’s comments really helped other students see how our course content went beyond the classroom.”

“I want him to get whatever out of life he wants with this degree,” said Eric’s son Jacob, left. “He’s put a lot of time into this and he’s preached the importance of education to me.”

‘It’s my son who keeps me going’

The student, in truth, has long been a teacher to son Jacob.

“He’s always given me the idea that if he can do it, I can do it,” said Jacob Gentry, a freshman construction management major. “Failure has never been an option, because after all he’s been through, how could I ever explain quitting or giving up?”

The younger Gentry recalled a time as a young boy when he and his dad were out for a long ride on the elder Gentry’s prized Harley-Davidson motorcycle. The weather shifted and suddenly the pair found themselves in a cold, sideways rain.

“But I just sort of tucked myself in behind him,” the son said, making a gesture of crouching. “He kept riding, slow and steady. He got us home safely.

“It’s my dad that I want to talk with if I’m having a bad day, my dad who I want to celebrate good news with. My dad says you have to create your own happiness, so I do, because he does.”

Eric Gentry smiles at the memory and nods.

The role of protector and provider is one Gentry willingly leans into. After graduation, he hopes to work full time with men and women who, like him, have a different look at life because of their time in the service. It’s a debt he believes he owes.

For now, Gentry’s philosophical side takes over.

“It’s my son who keeps me going,” he said, pausing. “I wouldn’t have believed I could do this. I feel like now I can handle adversity and obstacles. I’m excited for the future. 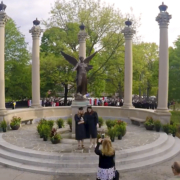 Words of Wisdom for the Class of 2017
Scroll to top