[dropcap]T[/dropcap]he fall season looks promising for the Cardinals, which is no surprise after a 2015 filled with accomplishments and records.

The team  took its third Mid-American Conference (MAC) regular season championship with a program-best 10-1 record in conference play. The overall 14-3-3 record was one win shy of the 2005 team’s school record.

“We’re delighted,” said head coach Craig Roberts. “I am immensely proud to be their coach. We’ll reflect, re-evaluate and come back even stronger this year.”

The Cardinals advanced to the MAC Tournament quarterfinals but lost to Akron on penalty kicks. 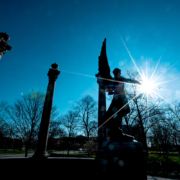