Blog
You are here: Home / Blog / More / Alumna Has Designs on a High-Fashion Future

[dropcap]S[/dropcap]amantha Rife hadn’t dreamed of straying too far from her Indiana hometown after attending Ball State, where she arrived in 2010 with her sights set on becoming a teacher.

But that was before the former county 4-H queen’s first class in fashion, her taste of reality TV competition on the West Coast and a life-altering behind-the-scenes look at — and internship with — Manhattan’s most prestigious bridal boutique.

Less than a year after graduating with a degree in fashion merchandising, the onetime elementary education major from Winamac is now plotting a course in the world of high-end fashion.

“I learned at Ball State that when you are passionate, people notice it. … I had a professor (in elementary ed), Dixie Denton, who gave me the confidence that whatever I decide to pursue, I should put 100 percent into it. My time in college also showed me to be open to look at things from different perspectives.”

Rife, who had always been intrigued with attire, found the confidence to take the next step. She decided to audition for the hit reality TV show “America’s Next Top Model” the summer before her sophomore year.

To her surprise, she made it to the show’s final audition rounds on set in Los Angeles. The show’s supermodel host, Tyra Banks, even saw her audition tape. Although she didn’t make it on-air, the experience was transformative.

“It blew my mind that fashion could be so different in other parts of the country.”

When she returned from LA after winter break her sophomore year, Rife began to see herself in a new light. She even took note of the early parallels of her story with that of famed Ball State alumna Angela Ahrendts, the Apple executive who grew up in another small Indiana town (New Palestine) and rose through the ranks of fashion to become CEO of the luxury brand Burberry.

But what really sold Rife on this new path was a summer 2014 field study that took her and about 15 other Ball State students to New York City to tour iconic fashion sites, including retailers, wholesalers and magazines.

One of them stood out.

Kleinfeld Bridal in Manhattan, known as one of the world’s finest bridal boutiques, is also home base for TLC’s popular “Say Yes to the Dress,” which follows brides in New York and other cities through the process of picking attire for their big day — and all the drama that goes with it.

Diana Saiki, the faculty member who organized the trip, saw that.

“She asked many questions and was fully engaged with the speakers,” said Saiki, an associate professor and program director for fashion merchandising. “I could see the difference in her after the trip.” Rife was the only one in the group to contact Kleinfeld about an internship — and became Ball State’s only student to get such a coveted spot.

In June 2015, she left Indiana for Manhattan, living near Madison Square Garden. She was a bridal consultant assistant and worked with women to find the perfect dress.

“At Kleinfeld, it’s your job to dig and listen to what the bride wants that also fits her body type and shape,” Rife said.

She rubbed elbows with people who are among the best in the business, including company co-owner Ronnie Rothstein and “Say Yes” star and former Kleinfeld fashion director Randy Fenoli.

These connections went beyond handshakes. The people involved became friends and mentors.

Rife also met Mark Zunino, a fashion designer for celebrities’ weddings and red carpet award ceremonies whose bridal designs are exclusive for Kleinfeld. Rife, who is engaged to be wed, persuaded him to design her wedding dress.

“It blew my mind that fashion could be so different in other parts of the country.”
— Samantha Rife, ’15

Another connection helped Rife reach the next step toward her dream of becoming a top-flight gown designer, perhaps even for Kleinfeld.

Now, Rife is a designer collections consultant for the department store chain’s location at the Fashion Mall at Keystone in Indianapolis. She works with a small list of clients who look to her for expertise in design, fit, tailoring advice and style, and to build their closets.

She’s using the knowledge she gained in pattern and construction classes to make recommendations to her customers and marketing skills from her minor to hit sales goals. Given the high price points of the clothing, the purchase is often for a special occasion.

The future is bright for Rife, who hopes to channel the eye-opening experiences she had while attending Ball State into making others’ dreams come true.

“Everything I’ve ever wanted to do in life is about creating moments. I’ve had my time in the spotlight, and so now I want to give other people similar opportunities.” 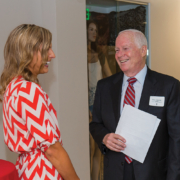 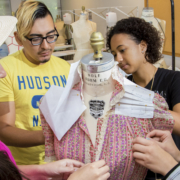 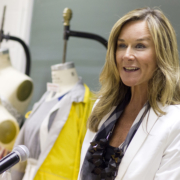 Angela Ahrendts Extols the Power of Listening and Collaboration 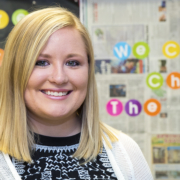 Student Creates a Preschool and Fills a Neighborhood Need
0 replies