The temperature was 95 degrees outside the dairy cow costume and who knows how hot on the inside.

That blazing August day portraying Buttercup, the Indiana dairy mascot, in a Wells County parade stands out among Jenni Browning’s memories. At the time, she was a master’s student in Ball State’s dietetics program.

There is a picture of me having just taken off the cow head. And it was just sweat.

Browning dressed as the Holstein to generate public support for a community nutrition study she was working on with Dr. Carol Friesen, professor of nutrition and dietetics.

ADAI’s mission is to help Indiana dairy farmers thrive. Much of the organization’s work involves marketing and public relations to share how vital dairy products are to nutrition.

Prepared for the challenge

Browning earned three degrees from Ball State: an associate’s degree in diet technology in 2002; a bachelor’s in exercise physiology and a master’s in dietetics, both in 2004.

She previously was ADAI’s senior director of communications and wellness, managing partnerships with Indianapolis Motor Speedway, Indiana State Fair, and others.

Now is an especially difficult time for dairy farmers, as milk consumption and prices have dropped, partly due to the COVID-19 outbreak. When Browning joined ADAI in 2008, the state had about 2,000 dairy farmers. Now that number is estimated to be about 800.

Browning said Friesen and other professors helped prepare her for the challenge of her job and continue to support her.

“It means a lot. It has helped guide me through my career. To feel that support and know you can ask questions, even when you are in your career, it’s priceless. Everybody wants a mentor in life.” 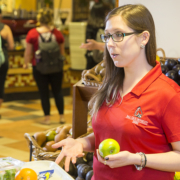 Award-Winning Campus Dietitian Steps Up to the Plate 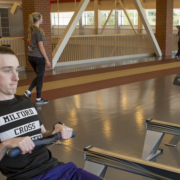