Tossing Frisbees on campuses is common, but it’s rare to find athletes who lead at the sport’s highest level, as do Cameron Brock, ’12, and Keenan Plew, ’11, who play for the Indy AlleyCats.

They’ve played together 11 years, first on Ball State’s Men’s Club Ultimate (there’s a Women’s Club Ultimate), and with the Cats since AUDL play began in 2012. “There have been times where Keenan has thrown a disc to a spot before I even started cutting there (quick directional changes to get open),” Brock said, “because he knew that’s where I was going to end up.”

Neither knew where he was going when each started in high school. Plew disliked Frisbee from the get-go in gym. “I was awful at throwing, and nobody knew the rules. Basically, it was a hot mess of kids throwing a Frisbee and chasing it.”

The summer after graduating, he learned the basics and began to be drawn to the running and strategy. But at his first Ball State practice, “Everyone was a better thrower than I was, and I got hit in the mouth with a Frisbee that was tipped by a defender.” Still, he developed a solid game of—and love for—Ultimate and its friendships. Today, he’s the Cats’ main thrower, or “handler.”

Brock immediately liked the speed and athleticism and kept working (his mom instilled “the desire to be the best version of myself”). Yet as a Cardinal senior with a running vertical jump measured near 38 inches in 2012 (NBA Combine-worthy), he didn’t think he was good enough to try out for the Cats. At the last moment, he relented, sweated through rounds of cuts, and was stunned to start on the offensive line.

I made the (Cats) because players at Ball State taught me the game and helped me get better. Other players and coaches have since taken up that task. 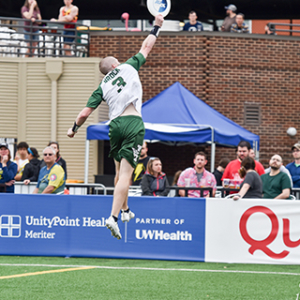 Indy AlleyCat Cameron Brock shows off skills he honed at Ball State. Like all players in the league, he and Plew want to get back in the game (COVID-19 led to canceling the season). But they’ll talk anytime about their college days, the game they love, and staying fit. Photo by Mike Gross, 144photos.com

Ask about the Ball State team, and both have great memories.

Brock’s highlight was as a sophomore, when the club had to win its final sectional game to make the national tourney’s regionals. “Tied going into what we call ‘universe point’ (next point wins), a teammate threw a floaty disc toward the end zone. I jumped between two Purdue defenders to catch the disc just over the end zone line. The entire team charged at me. Still my favorite moment of my career.”

Plew fondly recalls deep conversations while traveling for mostly regional tourneys: “I’m sure the topics were critically important at the time.” And the games … “Our ‘universe point’ win at the 2011 regionals to beat our nemesis, IU, to go into the championship bracket was incredible. In the fall of 2010, we played in a Wisconsin tournament, No Wisconsequences, and knocked off the No. 1 team in the country, Carleton College.”

So how’s this game go?

“Ultimate,” Brock explains, “is ‘Frisbee football’ to many, as you are going back and forth trying to score by catching the disc in end zones. Play’s continuous until a score. Like basketball, there are many times the disc is in the air and you must outleap your opponent.”

AUDL uses a football field, with 80 yards for play and 40 split for end zones. Games start with a “pull,” sort of a thrown end-zone kickoff, in front of crowds of about 500. Ultimate Frisbee, progenitor of Ultimate Disc, seems to have been first played by two New Jersey high schools in 1968. Ultimate’s now in nearly 80 countries and areas. The International Olympic Committee fully recognized the sport in 2015; its next hope of making the games is 2028.

As Cats players, Plew and Brock have worked through some difficulties.

Plew endured criticism after knocking down a Detroit Mechanix player during a well-publicized 2018 incident in the no-contact sport.

“I understand why people got upset. I hadn’t been touched by my defender; then they put a bigger defender on me. He ran into me multiple times, knocking me off my line and trying to slow me down. After the third time, I had had enough and stopped and threw my shoulder into his chest. It knocked him down because it caught him off guard. I could’ve handled the situation differently, but nobody from Detroit touched me the rest of the game.”

Brock pondered leaving the club a few years ago. “People weren’t showing up to practices or trying to get better, and some were completely mentally checked out before the season ended. I felt I was wasting my time.”

A new, much more committed coach was a start. And Brock felt a responsibility.

I needed to be vocal about team culture, or, at the very least, give an example for others.

Those struggles make sense when you consider the league’s age. Its first year was like the Wild West, each said. “The league had very little stability,” Brock said, “teams folded in the middle of the season, and we were in uncharted waters.”

The waters calmed. The eight founding teams are 22 now. Brock predicts more interest in play due to head injury concerns in other sports. And he sees a time, maybe 30-40 years out, when Ultimate can be a full-time job. For now, all competitors will be paid starting next year, said Tim DeByl, AUDL’s VP of marketing. It will be at least $50 for the 12-game 2021 season, though he said some athletes will be paid more. Players also get free uniforms, travel, and lodging.

Benefits, coaching and the future

Brock and Plew say the sport has influenced their lives positively. Staying in shape is one dividend for the Indy-area teachers. 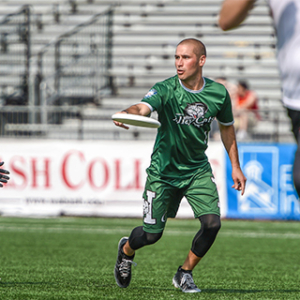 Plew does mostly cardio and light lifting in season. At 34, biking’s replaced sprints and other running. After the season’s last game, he focuses on footwork drills and some cardio, plus yoga. “It killed me to start, but I now see the benefits.” He also throws in Indy’s fall/winter leagues.

Workouts for Brock, 31, are more strategic than when he practiced jumping as a kid so he could dunk a basketball (it worked). They’re almost all sprints and skill practice in season because “I need to be able to run forever.” Offseason, he lifts for core and lower body strength and explosiveness.

Plew, who majored in teaching physical education, has coached high school Ultimate Frisbee. That helped him become a calmer, more reflective player, which also helped his youth team. And after learning most offensive and defensive variations, he said he’s a smarter player.

Brock coaches cross-country and girls basketball where he teaches and has coached Frisbee elsewhere. By seeing the game from another perspective, “I’m able to better teach my teammates the things I’ve learned.”

Both know that life can change things.

Plew and his wife, Mel, have a daughter, Scout, who’s about 15 months old. “A few years ago, Ultimate was about the only thing on my mind,” he said, “but now it has to take a back burner to my family.” After Plew leaves the game, though, he might coach high school Ultimate again.

Brock and his wife, Casey, welcomed Calvin Edward in March, and he said those family responsibilities will come before Ultimate. The journalism major loves coaching, but he doesn’t think he’ll continue after he stops playing.

When they complete their careers, each will know he’s been a pioneer in the game. And they’ll have the ultimate in memories.

Season update: In late June, the league canceled the season. The annual All-Star Game will be played in 2021.